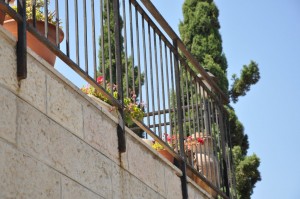 Real estate prices in Haifa have remained depressed despite the existence of the port and the fact that it is one of Israel’s major cities.

Ashdod is another matter.  Real estate prices in Ashdod have risen in recent years but that is predominantly due to the influx of olim (new immigrants) from France.

Haifa, as a city has a lot going for it.  It sits on one of Israel’s only natural harbors and has one of Israel’s few major deep water ports.  It is home to many historical buildings and neighborhoods, such as the first German colony built in the Land of Israel in the late 19th century and the Bahai Temple with it beautiful gardens which can be seen from the sea by approaching ships. It is situated in the northern part of the country on the main railroad line between Tel Aviv and Beersheba.

There is some heavy industry in the city as well as a high tech industrial park and all of these elements can provide jobs for its inhabitants.  In addition to this a beautiful boardwalk has been erected along much of Haifa’s beaches.  Cruise ship companies have begun to add the Port of Haifa to their list of Mediterranean destinations.

Judging by all this, Haifa should be an attractive investment.  Yet so far this has not been the case.  Perhaps the city should attempt to market itself to young families in Israel and abroad. Change is bound to come, and therefore it might be prudent to consider investing in Haifa now when the prices are still low, waiting for the one thing that will put Haifa on the map of worthwhile real estate investments and then reaping the rewards.

Ashdod, as Israel’s second major  deep water port, has already seen a rise in real estate prices due to the influx of new immigrants from France.  The train line has been extended to reach Ashdod  and cruise ships from Europe also dock at its port.

There are plans to enlarge the port of Ashdod by the construction of 1,100 meters of docks, the lengthening of the current wave breaker by 600 meters and by constructing another wave breaker of 1500 meters. Whether or not this will give Ashdod another push in the development of the city remains to be seen.  It is clear however that anyone thinking of real estate investments would do well to keep an eye on both Haifa and Ashdod in the future.

Real Estate in Israel – A Retrospective