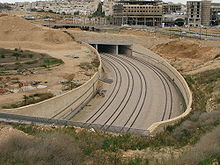 Anyone who has ridden the rails in large cities such as New York knows that very often the underground train stations are like cities unto themselves with many square meters of stores, coffee shops and restaurants. We have not seen this in Israel – yet. Sometimes the train station will be right next door to a major shopping mall and office building such as the Hashalom Station of Tel Aviv which is right next to the Azrielli Towers and shopping mall. However you do not see train stations their own commercial space.

I seems that this is about to change.  The first station that will enjoy its own commercial space is the Modiin Merkaz station.  This station is right next to the Azrielli mall in the center of Modiin.  The station has several thousand meters of commercial space that will be rented out by the Israeli Railroad company.  There will also be underground pathways to the adjacent Azrielli Mall and office building complex and the central bus station now being constructed next to the train station. According to a contract between the Israeli Land Authority and the Israeli Rail Road Company more such commercial centers are planned for another 30 train stations all over the country. The profits from the rent collected on these commercial properties at the trains stations will go straight to the pocket of the Israeli Rail Road Company.  It is important to note that the Israeli Rail Road Company was given an exemption from participating in a legal tender for this property.  This is rare in the sale of the rights in land by the Israeli Land Authority which is obligated by law to market its land only by public tender.

Foreign Real Estate Investors Where Are You?

Real estate transaction at all costs?

The Loss of the Foreign Purchasers of Israeli Real Estate