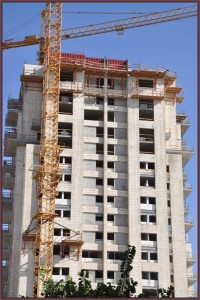 Sunday is one of my favorite days. That’s because on Sunday evenings the real estate supplement of the Globes newspaper (one of the leading Israeli business newspapers) is delivered to my door.

Some of the statistics in the supplement highlighted the growth of the Israeli economy over the past twenty years. Below are a few particularly interesting statistics.

In 1993 there were 1.3 million households in Israel. In 2012 there were 2.2 million. This shows an increase in population and the need for more housing.

We also have seen an increase in tall buildings which allow for more apartments on a smaller footprint of land. The country is undergoing a major urbanization process.

However, we also note a major decrease in government investment in housing. Is it any wonder? With these statistics does the government really have an interest in bringing down the price of apartments?

Where do you think real estate in Israel is headed? Comments welcome.

War and Peace – The Effect on the Israeli Real Estate Market