We advised our client that the construction company should assume responsibility to safeguard our client in the event that the subcontractor defaulted on his obligations.

The construction company agreed, at our insistence, to assume legal responsibility for the changes made to the apartment and this was written into the purchase contract. The subcontractor declared bankruptcy after taking payment from our client but before finishing the work. The construction company was obligated to finish the work but our client, protected by a solid contract, did not have to pay twice to have the same work done, thus saving thousands of shekels.

Case Study: Interpretation is in the Eye of the Beholder

Our client wanted to transfer his apartment into his daughter’s name. His wife had died some years before. The wills they had drawn up together left all property to the surviving spouse and, after the death of the surviving spouse, to their daughter. Each will had a provision that allowed one of their sons, who was mentally impaired, to continue to live in the apartment.

We applied for probate of the wife’s will in order to transfer her rights in the apartment to her husband. At the same time, we prepared documentation for the transfer of ownership from the father to the daughter.

The apartment transfer was stalled.

We went to work to solve each situation separately. Over the course of many meetings, we convinced the Israeli Land Authority to agree to the registration and the Land Registry clerk to do the same.

Our client finally achieved his goal: the rights in the apartment were registered in the name of his daughter.

Our clients wanted to sell their apartment and buy a new one in its place. Unfortunately, although they had purchased their apartment several years ago, it was not yet registered in their names. This oversight meant that they could not sell their apartment. They were unable to reach the lawyer they had used for that transaction and were at a loss about what to do next.

We called their original lawyer, discovered the reason for the delay, solved the problem and registered the apartment in our clients’ names

When our clients found a buyer for their apartment, there was nothing standing in the way of the sale.

Case Study: Never Give Up

Not all transactions go smoothly no matter how well the contract is worded.

We represented a couple who were purchasing a house. The seller was an older, single woman with a strong personality who behaved very badly throughout the deal. Her behavior was reinforced by her brother with whom she consulted on all issues.

The seller was obligated to lift her mortgage by a certain date but she did not do so.

We advised our clients to hold back money until the seller fulfilled her obligations in this matter. The seller threatened to sue. We recommended that our clients hold steady and not submit to the intimidation and bullying of the seller. We put pressure on the sellers’ lawyer to convince his client to act more responsibly.

Our clients took our advice, did not give in, and the seller lifted the mortgage. Our clients received their house free and clear of all encumbrances.

Case Study: A Maze of Complications

Clients came to us a few years ago with a very complicated deal in which they switched apartments in the same building and detached storage units from one apartment and attached them to other apartments. This was very difficult legally, because it meant that much of the basic registration of the original apartments needed to be changed.

Alongside the basic transactions of transferring the title in the apartments from the sellers to the purchasers, we also needed to notify the construction company, the Israel Land Authority and the mortgage banks that storage units would be detached from one apartment and attached to a different one. This essentially entailed four different transactions at once for the same properties.

We prepared separate paper work for each transaction, submitted it to the relevant authorities and followed up the progress with every agency involved.

After finding our way out of the legal maze involved in such a complex transaction we were able to complete the deal to our clients’ delight. The storage units were transferred and registered to their new apartments.

Click to read testimonials from some of our clients. 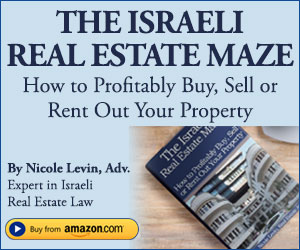