Buying property in Israel despite a low dollar-shekel rate

The dollar-shekel rate reached a historic low last week. Most foreigners automatically assume that this will make it more difficult to buy a home in Israel, yet there are several ways to reduce the impact of the exchange rate on a property purchase. Those who buy a new property now can pay just 20% of the price upfront and wait to pay the balance upon delivery of the completed apartment at which time the dollar may be stronger in relation to the shekel. In addition, a special regulation set by the Bank of Israel allows foreign residents to effectively borrow up to 70% of the property value as opposed to 50% during pre-Corona times.

For those whose income is in US dollars (USD), the weakening of the dollar-shekel exchange rate to a historic low of NIS 3.11 as of last week, makes purchasing a property in Israel particularly challenging. The dollar has subsequently recovered slightly, thanks to the intervention of the Bank of Israel, and as of the time of writing this article, the exchange rate has risen to NIS 3.23. Nevertheless, the rate is still very low compared to a year ago (NIS 3.45) and two years ago (NIS 3.65). 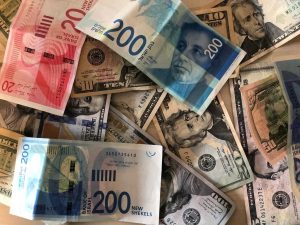 With a strong shekel, Israeli exports, products, and services become expensive for foreign consumers, who do not hold shekels, to buy. For those whose income is in US dollars, this makes purchasing a property in Israel particularly challenging. Many foreign buyers who are seriously considering buying an apartment in Israel may instinctively put their plans on hold until the dollar strengthens, however, there are other variables to consider:

The forex market is always changing

According to Daniel Eisenberg, Chief Commercial Officer at IsraTransfer, when purchasing an apartment on paper (off-plan), where construction has not yet started, developers commonly allow an initial payment of just 20%, with the balance paid at the time of occupancy.

“You are essentially buying something that will be ready in about 3 years, and over the course of those 3 years there is no reason to assume that the dollar-shekel rate will not rise from the historic lows. The forex market is extremely volatile; it goes up and down like a roller coaster,” describes Eisenberg, “there is good reason to believe that at some point over the course of the construction period, the dollar will be significantly higher than today. When that time comes, you can pay the balance – in whole or in part. The buyer has the opportunity to take advantage of the fluctuations in the foreign exchange market over time.”

Waiting to purchase property could pose a financial risk

Why would someone buy now, instead of waiting 6 months or a year to see if the dollar strengthens? “While that may make sense, there is also a price to waiting,” warns Eisenberg, “Those who wait could miss opportunities – known as the opportunity cost. Look at Eden Hills, for example, a community currently being built in the Adulam region, where many Americans have purchased. When the first phase went on sale, prices were still relatively attractive, but by the time the second round hit the market, prices had already increased significantly. Marketing recently began for the third phase, and the prices are even higher. Those who waited too long are either buying at a significantly higher price or cannot afford to buy at all.”

“On top of this, sometimes buyers need to purchase immediately, due to life circumstances, and don’t have the luxury of waiting for the ideal dollar-shekel rate. There are many Jews today who no longer feel comfortable in the United States,” suggests Eisenberg as an example. “Even if they are not looking to make Aliyah in the immediate future, many of them want to have the security of owning a property in Israel. Since many American Jews are interested in buying in areas with an established Anglo community, such as Ramat Beit Shemesh, Modi’in, or in certain neighborhoods in Jerusalem, these areas may see a price increase. Those who wait too long, risk losing out.”

Although Eisenberg admits that it is very difficult to predict the future of the dollar-shekel rate, he estimates that the current trend is unlikely to continue, and that the shekel will probably weaken over the next few months with intervention on the part of the BOI.

“The past year has been extremely unstable in the United States – due to the COVID-19 pandemic, its economic impact, and political and civil unrest. With the change of government scheduled for this week, it is fair to assume that, at least on the political level, America will return to a more normal course. Political stability should lead to a stronger currency.”

“In addition, the Bank of Israel doesn’t just sit around when the value of the dollar drops, because one of its functions is to protect exports. It will do everything in its power to restore balance” says Eisenberg.

Shortly after Eisenberg spoke to Buyitinisrael on Thursday, the Bank of Israel indeed announced a plan to purchase $30 billion, “In 2021, the Bank of Israel will purchase $30 billion. The advance announcement of the scope of the purchases is intended to provide the market with certainty regarding the Bank’s commitment to dealing with the recent sharp appreciation, and thus support the economy’s continued dealing with the economic ramifications of the COVID-19 crisis.” Following this declaration, the dollar-shekel rate increased by an astounding 7% that day.

Assuming that someone does decide to purchase a property in Israel when the shekel is strong, the obvious question arises: how to best finance it? According to Dani Schecter, Tel Aviv branch manager for First Israel Mortgage, the equity component is the most problematic, since the assets of many foreign buyers are held in USD, and the price of the property in Israel that they are purchasing is going to be in shekels. “The buyer, therefore, should try to reduce the equity component in their purchase as much as possible.”

According to Schecter, the current Bank of Israel regulations allow a foreign resident to obtain bank financing for the purchase of a property of up to 50% of the value of the property (loan-to-value, or LTV). That said, the Bank of Israel introduced new regulations in light of the COVID-19 crisis which allows all borrowers (both Israeli and foreign residents) to obtain an additional 20% financing as a “cash-out” refinance. This effectively allows foreign buyers to borrow up to 70% on a new purchase (50% financing to close on the purchase, and 20% “cash-out” to be funded shortly after closing). Previously, the limit on a “cash-out” refinance was 50% LTV in total.

For those looking to either purchase a new property or take cash out of their existing properties in Israel, this presents an opportune time given the additional financing available. A few important aspects to note: 1) the cash-out funds may be used for any purpose except for the purpose of buying another property in Israel. So, the money could be used for closing costs, renovations, and furnishing the new home, for example.  2) “cash-out” funds may only be applied for and received after the mortgage has been taken and the seller has been paid in full; 3) The regulation is in effect until the end of March 2021, but it is likely to be extended given the ongoing financial crisis.

What about the mortgage itself? Is it better to take it in dollars or shekels? Schecter explained the logic behind each option: “If you are of the opinion that the USD will recover, then you should take your loan in shekels. As the USD strengthens against the shekel, the loan balance, in USD terms, will be reduced allowing borrowers to repay it in the future with less USD than the amount originally borrowed. If you think the USD will continue to weaken, then take the loan in USD. And, if you do not have a strong opinion one way or the other, you can take part of the loan in shekels and part in USD to limit your risk.”

While the Bank of Israel and the Finance Ministry can intervene to slow the shekel’s growth, it is unclear how effective those steps will be. There is always a chance that the dollar will further weaken against the shekel. In such a case, property values (in USD terms) will become even more expensive and possibly prohibitive to foreign buyers whose money and income is in dollars. This may be a good reason to consider a purchase sooner rather than later.

Published by Buyitinisrael on 17.01.2021.  The original article can be found here.

The contents of this article are designed to provide the reader with general market information and not to serve as professional advice for a particular transaction. Readers are advised to obtain advice from qualified professionals prior to entering into any transaction.