There are many historical sites in Israel. The big question is what is to be done with them? 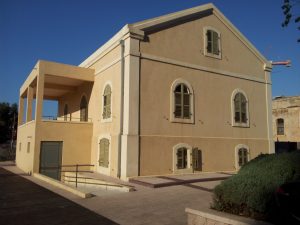 What makes sites or buildings built after the year 1700 historical?

There are several criteria that come into play when deciding if a site is historical.  Did a famous person live there ( i.e. The house of Bialik)?  Did an historical event take place there (i.e. the house of Meir Dizengoff where Israel was declared a state)?  Is the building’s architecture beautiful? Does the site show a special phenomenon of social history (i.e. is it a kibbutz or moshava?).

Once a site or building is declared historical, what is to be done with it?

This train station and indeed the whole train line from Jaffa to Jerusalem was built in 1892.  The concession for the train was bought by Yaakov Navon and the station and railway line was built by a French company. The train station in Jaffa was built north of the old city of Jaffa just next to Neve Shalom , the neighborhood of Manshiya (destroyed in the the 1970’s) and the German Colony of Walhalla. Today we would say that it is just next to Neve Zedek. Just adjacent to the station are the small factories of the German Colony Walhalla. During the time of the British Mandate there was an army base there. After 1948 the IDF had a base there as well.  After this the station and the buildings lay dormant and abandoned for many years.

Approximately ten years ago the station’s buildings and the remains of the German Colony’s factories were preserved, conserved and renovated. The buildings are used to house restaurants, night clubs and stores.  An authentic old railway car was turned into a little museum. There are a few signs explaining what the whole thing is all about.

Sarona was an agricultural settlement established by a group of German Templars from Wittenberg, Germany during the second half of the nineteenth century.  These settlers were Christians who believed in settling in the Holy Land and living a simple agricultural existence. They established colonies in Jerusalem, Haifa, Jaffa and other places. The buildings in Sarona are the farm houses of the settlers that lived there. For many years these houses were used by the Israeli Ministry of Defense. About 5 years ago the Israeli Land Authority sold the buildings on the southern side of the site to private investors, who conserved the buildings and created a beautiful park.  The buildings have been rented out to restaurants and shops.

The Economic Woes of Sarona and the Old Train Station

It has become apparent that the businesses that rented these buildings are not doing well. In Sarona they complain that people visit the site but buy nothing.  The complaint about the train station is that it is empty of visitors. The businesses of these two sites are suffering and may not be able to hold on much longer.

Was it a mistake to turn these historical sites into commercial shopping centers? Should they both have been turned in museums?  And if yes, who would have paid for this as we know that museums are not profitable enterprises?

The Battle for Israel’s Archaeology