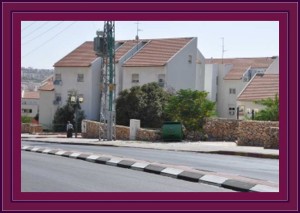 At a time when real estate prices are high, everyone is looking for the next up and coming real estate investment. It is not always easy to know just where this is but sometimes the writing is on the wall.

In Israel there are several ways to predict where the next great investment will be.  One way is to follow the Anglo Olim (new immigrants from English speaking countries).

In every decade Anglo Olim favor a different city.  In the 1970’s most Anglo’s made aliya (immigrated) to Jerusalem, Petach Tikva, Rehovot and Netanya.  As a result the real estate prices in those cities soared.

In the 1980’s most Anglo olim made aliya to Jerusalem, Efrat and Raanana.  Consequently real estate prices in those cities soared making them out of reach for the average Israeli and even the average Anglo Oleh.  In the 1990’s Beit Shemesh was the city favored by Anglo Olim.  The prices in Beit Shemesh rose beyond the expectations of any real estate expert who claims to know what is going on in Israeli real estate.  Between the year 2000 and 2010 the same became true of Modiin and Zichron Yaakov.

Anyone buying an apartment in any of those cities before the mad rush of Anglo Olim doubled and sometimes tripled their investment.

It is important to note that, in the cases of all the cities listed above, their location contributed to the success of the communities who lived there.

If people can’t find jobs then their absorption process will fail and they will have to search for another city or leave the country.  Beit Shemesh and Modiin are located in the center of the country between Jerusalem and Tel Aviv giving the olim ample opportunity to find employment.  Zichron Yaakov lies in the middle of the train line between Tel Aviv and Haifa and close to the industrial zone of Yokneam, giving the olim plenty of employment options.

For the past few years, Aliya organizations such as “Nefesh b’Nefesh” have been pushing olim to settle in Carmiel, a small city in the northern part of Israel.  Could Carmiel become the next up and coming city?  Does it have all the other requirements necessary for the real estate in the city to soar besides an influx of Anglo olim?  Anyone who answers this question may have his finger on the next best real estate investment in Israel.

The Israeli real estate market under the Shadow of Corona

The Problems with Urban Renewal in Israel