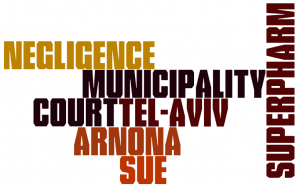 In a recent decision of the Tel Aviv District court it was ruled that a party that incurred damages as a result of negligence of the municipality in calculating municipal taxes (Arnona) can sue the municipality for damages without using the Arnona appeal process mandated by law.

In this particular case (Superpharm V. Tel Aviv Municipality) the Tel Aviv Municipality charged the plaintiff Arnona based on the size of the property.  After new measurements were made it became apparent that there was a mistake in the size of the property for which the plaintiff was asked to pay Arnona.  The plaintiff had been paying Arnona in excess for several years due to this mistake.  When the Plaintiff learned of the mistake it sued the Tel Aviv Municipality for compensation for damages incurred as a result of the mistake.  The Magistrates court rejected the claim stating that the  place to rectify this wrong is the committee set up to hear appeals on Arnona.  The Plaintiff appealed the decision of the Magistrates court to the District court of Tel Aviv.

The District court of Tel Aviv accepted the appeal.  In his decision Judge Yishayahu Shneller differentiated between two situations, one where there is a dispute as to how to calculate the tax and the second where the amount of the tax is wrong due to a mistake made by the municipality.

In the first case there is a dispute as to how the tax should be calculated and therefore the place to settle such a dispute is an appeal to  the committee set up to deal with these types of disputes.  In the second case there is no dispute how to calculate the tax but the tax paid was too high due to a mistake made by the municipality.  This second case constitutes negligence on the part of the municipality, which is obligated to calculate the tax correctly.  In this case the Plaintiff was justified in suing for the damages incurred by him to the regular civil courts without first appealing to the local committee.